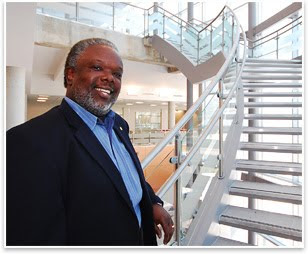 As president of the AIA’s local Houston chapter, Dan Bankhead, AIA is closely invested in the organization and in its capacity to respond to the recession. When he was elected president, he set out to expand local AIA membership both in terms of numbers and diversity. Then Wall Street cratered. Despite financial challenges facing architects and design firms, the chapter has grown. And for good reason, argues Bankhead, since the chapter provides tools and the venue to practice amidst a recession.

Asked about the value of joining the AIA when finances are strained, Bankhead, an AIA member for more than 10 years, says, “I definitely think it is important to do so—absolutely. In this kind of economy, the AIA has so many resources.” He cited the larger, more systemic efforts at the national level to stimulate the industry, but he emphasized the critical role that all the local chapters play. In Houston, like in many local AIA components, the AIA has responded quickly and assertively, organizing business symposia, networking events, and making available resources directed at economic concerns.
To this end, Bankhead assembled a series of business seminars this year aimed at addressing many of the questions architects are facing in this current economic climate. “We developed this program to help teach firms to become more economically sustainable,” he explains. They cover issues ranging from business practices, marketing, and project acquisition.
He has also tailored the program for the local market. “Houston has one of the largest healthcare centers in the country, so this forms a significant part of the architectural business here,” Bankhead explains. “Earlier this year, the local AIA held a meeting about the healthcare market, and over 400 people attended. This was a case of the AIA giving practical tools to help with an important market.”
Though the session was informative and well received, its benefits went beyond the opportunity for education. “There was a lot of great material discussed in the meeting, but it also put architects in front of potential clients,” explains Bankhead.
For Bankhead, the AIA offers a clear competitive advantage for job seekers. “When there are just a few jobs that everyone is chasing, and if someone is looking at a stack of resumes, it’s going to help to have the ‘AIA’ behind your name,” according to Bankhead. But it goes beyond credentials: “The AIA network will put you in front of potential employers,” he elaborates.
He has organized a series of networking forums, including a “Speed Networking Event,” where firms that are looking to interview are matched up with interviewees in rapid fire succession. The event was a big success, with more than 200 people participating. “The event went very well, but what we noticed,” explains Bankhead, “is that people got a chance to network outside of the program itself. We got people together, and we hosted the program, but people had a chance to meet folks on their own, too.”
Bankhead is committed to the architectural profession’s vigor not only as an architect and local AIA chapter president, but also as an educator. He also teaches courses in professional practice and construction services at Prairie View A&M University. There, he reminds his students to get active in the profession and to chase down opportunities.
“There is an entire generation of architects that we can’t afford to lose,” he cautions. For this reason, he considers it important for younger, emerging practitioners and students to get involved with the AIA—and for more established professionals to encourage and mentor them. “The Assoc. AIA is a great way to get into the network early, and to get access to folks.”

“It’s been a tough year,” concedes Bankhead. “But altogether, it’s been a great ride. We just need to stay involved. And the AIA has a lot of resources to do that.”

Posted by Texas Society of Architects / AIA at 3:33 PM No comments:

Join the members of AIA Austin, Saturday, Dec. 12, from 1-5 pm, for the first annual OPEN ARCHITECTURE event, an "open house" of architects' studios.

See inside these creative East Austin businesses, hear plans for future projects and developments straight from the architects themselves, and experience the unique styles and personalities of each studio.

Maps will be provided so you may tour the studios at your own pace. Refreshments will be served.

For more information, click here
Posted by Texas Society of Architects / AIA at 11:06 AM No comments:

Digital parametric design is the linking of variables to geometry within 3D CAD software relative to constraints defined by the designer of a project.  The control of dimensional criteria within a part of a system can be associatively linked to the entire model.  A modification to the whole project has its repercussions on the constituent parts of the design without rebuilding the entire model.

Digital Fabrication is the ability to cut and form materials directly from digital information extracted from virtual models.  Laser cutting, water-jet cutting and CNC routing are just some of the processes readily available to the designer to go directly from file to physical reality.  These techniques are not new to the automotive and industrial design where rapid-prototyping is used in the design process and increasingly in the production of products.  The application of digital fabrication to architecture appropriates and transfers technology from the petrochemical and aerospace industries as it scales up.  Its has to potential to drastically increase the accuracy and efficiency of the construction process as well as open new territory for innovative structures and patterns in design.

The confluence of these techniques of design thinking and making is driving the innovative work in schools of architecture and is becoming a pervasive part of practice with the proliferation of BIM software and integrated project delivery practices.  Texas is uniquely positioned to become a leader in the application of digital technology to building processes due to its pervasive and atomized light industrial manufacturing capabilities and the relative ease to get things done through its “can-do” attitude. 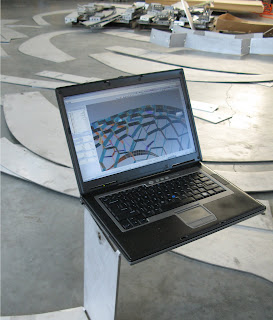 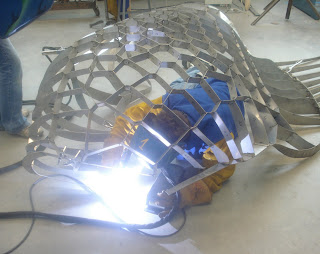 The New Harmony Grotto, a digitally fabricated reimagining of Frederick Kiesler’s design for the Grotto for Meditation currently under construction at the University of Houston College of Architecture, image by Metalab.

A new initiative called TEX-FAB seeks to elucidate these processes to a wider audience and create a forum for networking between allied Texas designers applying digital fabrication in practice and academia.  The first TEX-FAB event will be the Parametric Modeling Workshop planned for February 5th and 6th of 2010 to be held at the University of Texas Arlington School of Architecture. The workshops, featuring some of the leading software developers, designers, and instructors in the field of parametric design, are open to current architecture professionals, faculty and students.

In addition to the workshop, two public lectures will be presented on the top of digital fabrication. Axel Paredes from the Universidad Francisco Marroquín will speak on February 3rd at the University of Texas Arlington and Scott Marble of Marble Fairbanks in New York will speak as part of the Dallas Architecture Forum at the Magnolia Theater in Dallas on February 4th.  On February 5th the exhibition entitled “Partial Architectures” will open concurrently with the workshop and provide a venue to exhibit work done by designers from the region who have utilized digital fabrication in the design process.

For more information or to register for the workshop you can go to www.tex-fab.net.

Posted by Texas Society of Architects / AIA at 2:22 PM 1 comment: