The University of Oklahoma College of Architecture invites paper proposals for its 2010 Creating/Making Forum, which will be held in Norman, Oklahoma, Nov. 3-5, 2010. Click here for more information.
Posted by Texas Society of Architects / AIA at 4:15 PM No comments: 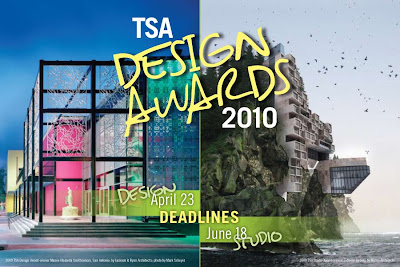 The tally is 202 entries in the 2010 TSA Design Awards. The DA jury is scheduled to meet May 21 and winners will be announced by early evening via the TSA blog, Twitter, and Facebook group. Stay tuned...
Posted by Texas Society of Architects / AIA at 11:46 AM No comments:

Best Green Buildings of Past Year 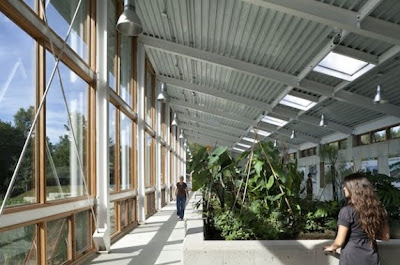 A net-zero building: All of the energy comes from sources on site, mostly from solar panels. Image courtesy of AIA.
Recently, the American Institute of Architects and its Committee on the Environment announced the 10 best green buildings completed in the past year. It's filled with all manner of green technologies--from passive heating and cooling using heat pumps, to man-made wetlands, to reclaimed materials. Click here for a slideshow of all ten.
Posted by Texas Society of Architects / AIA at 12:54 PM No comments:

Architects are Tapping into Social Media

Increasingly, architects are tapping into social media to connect with peers and promote their work.
By Jessica Sheridan, Assoc. AIA
Architectural Record
April 2010

It seems like everyone these days is constantly plugged into their technological devices, tweeting their whereabouts, Facebooking their statuses, and publicizing anything and everything about themselves. Companies are even engaged in the phenomenon, using social media tools to market their products and services. But for architects, do these online pursuits pay off?

Design firms that have integrated social media into their practices report a spike in interest in their work — particularly from journalists, publishers, and other architects. However, few can say their efforts have directly led to new projects … yet. Social media is so new to the profession that it may take a few years before the benefits can be measured, but some firms are investing now with high hopes for future rewards.

The definition of social media is nebulous. While it can be characterized as an online tool that allows users to interact — and generally is free or low-cost — new forms of social media are continuously being introduced. Social media has existed since the dawn of the Internet, when news groups such as Usenet (1979) were developed to track server-to-server news feeds, and became more prominent with the debut of blogging in 1997. In recent years, it has become even more multifaceted and ubiquitous, with sites such as LinkedIn (2003), YouTube (2005), Facebook (which went mainstream in 2006), and Twitter (2006) redefining the online experience. How social media will evolve is difficult to predict, but no doubt it is changing how people do business.

Recently, the AIA New York Chapter’s marketing and public relations committee presented a series of discussions dubbed “Why to Blog, Text, and Tweet.” By inviting panelists in the design industry who are engaged in social media, the committee hoped to encourage other architects to try it, explains Tami Hausman, president of the public relations firm Hausman and one of the event organizers. “While the design community may not be using social media as a tool,” she says, “other companies, especially those that produce consumer goods, are using it effectively.” She adds, however, that architecture is a business based in service, which is often a more difficult sell. “In general, firms are sticking with what they know, and what they know works, particularly in this difficult economy.”

For her part, Hausman is a social media proponent. “The problem with social media is that people see it as a ‘thing,’ when it is actually more of a tool,” she says. “Instead, it needs to be integrated into current marketing efforts, not separate from them.”

By far the most active adopter of social media at a firmwide scale is HOK. With the launch of Life at HOK (hoklife.com) in October 2008, the firm made public the people and process behind the projects. The Web site — a supplement to the company’s main site, HOK, at hok.com — is essentially a blog where approximately 35 employees around the country post an assortment of musings, from opinions on current events to features on firm leaders. Included are links to YouTube videos, Facebook profiles, Delicious bookmarks, and Flickr images, among other Web pages.
Click here to continue reading the article.
Posted by Texas Society of Architects / AIA at 12:47 PM No comments:

Join the members of AIA Austin in the 2010 OPEN ARCHITECTURE event, an “open house” of twenty-two architects’ studios in the downtown Austin area. Visit these creative businesses, hear plans for future projects and developments straight from the architects, and experience the unique styles and personalities of each studio. Maps will be provided so you may tour the studios at your own pace. Refreshments will be served.
Saturday, May 1, 2010
1:00 - 5:00 p.m.
Tickets - $5.00 wristband.
Presale tickets are available through PayPal via the AIA Austin website.
Posted by Texas Society of Architects / AIA at 4:35 PM No comments:

The Texas Historical Commission’s Antiquities Advisory Board (AAB) met yesterday to consider approval of conceptual plans for the Texas Governor’s Mansion. Two options were considered: one that involved making the back stairway code-compliant, which would involve some renovations to the kitchen area due to the new and improved stairway eating up kitchen space, and the other involving both the stairway updates and an addition of a bedroom and bath. The key problem noted by the State Preservation Board (SPB) was the kitchen and the disruption/reduction of this space in order to make the stairway code-compliant. The SPB pointed out that the kitchen is not just for the First Family’s use, but for many public events where the Family may or may not be involved. The SPB stressed that, regardless of which option the AAB chooses, of utmost importance was adhering to the Department of Interior standards, including maintaining the symmetry of the Greek revival building. To view the options yourself, visit the SPB website.

TSA President Heather McKinney, FAIA, testified before the AAB. To review the testimony, click here. Generally, TSA took the position that the SPB’s plans (both options) were headed in the right direction and that the organization appreciated being included in an April 9th briefing with SPB staff. At the conclusion of the hearing, the AAB voted to recommend to the THC Commissioners approval of both options so that THC staff had some flexibility in managing the development of the project plans in between formal THC meetings. This was noted by one Commissioner, Donna Carter, as particularly important since the SPB is shooting for construction to begin in July. This Thursday, the THC Commissioners will vote on the AAB’s recommendation so stay tuned.

Posted by Texas Society of Architects / AIA at 10:06 AM No comments:

A view of Congress Ave. Bridge from the Austonian's observation deck.
A bird's-eye view from the Austonian, designed by Ziegler Cooper Architects. Located in downtown Austin and scheduled to open in June, the 56-story structure is the tallest residential building in Texas. Photographer Thomas McConnell took these images during a scouting shoot. The building will be featured in the July/Aug issue of Texas Architect, "Extreme Architecture." 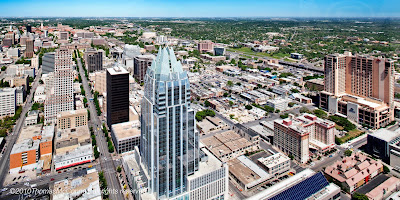 A view of Frost Bank Tower from the Austonian's observation deck.
Posted by Texas Society of Architects / AIA at 11:45 AM No comments: