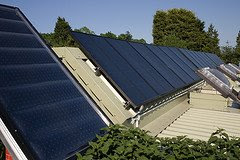 CNN, May, 14, 2009 -
The House on Thursday passed a $6.4 billion school modernization bill that would commit funds for the construction and update of more energy-efficient school buildings.
The measure passed 275-155 in a largely party-line vote, and will now move to the Senate for further review.

Among other things, the bill allocates substantial funds for improvements along the Gulf Coast, where many school districts are still struggling to repair buildings damaged by hurricanes Katrina and Rita.

The legislation, according to the House Education and Labor Committee, also makes schools part of the effort to revive the U.S. economy and fight global warming by "creating clean energy jobs that will help put workers in hard-hit industries back to work."

The committee says the bill would require that 100 percent of the funds go toward green projects by 2015, which is the final year of funding under the bill. Read more here.
(Photo by Dominic Alves)
Posted by Texas Society of Architects / AIA at 9:06 AM