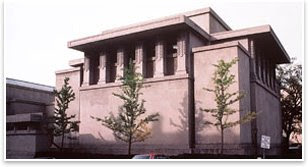 AIArchitect, May 29, 2009 -
The National Trust for Historic Preservation (NTHP) announced last month its 2009 roster of “America’s 11 Most Endangered Historic Places.” The 2009 roster includes Modernist structures such as Frank Lloyd Wright’s Unity Temple in Oak Park, Ill. (pictured above); Miami Marine Stadium in Virginia Key, Fla.; and The Century Plaza Hotel in Los Angeles. The list also includes an eclectic mix of historic sites and structures, such as the hangar for the Enola Gay at Wendover Airfield in Utah; Dorchester Academy in Midway, Ga., initially a school for freed slaves; Lanai City in Hawaii, an intact plantation town; Memorial Bridge, the first major "vertical lift" bridge in the eastern United States, connecting the coastal towns of Portsmouth, N.H., and Kittery, Maine; and Ames Shovel Shops, a 19th-century industrial village in Easton, Mass. Read more here.
Posted by Texas Society of Architects / AIA at 3:21 PM