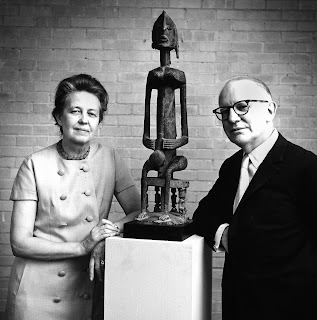 Dominique and John de Menil, 1967. Photo courtesy of The Menil Collection.
In 1973, Dominique de Menil directed the architect Renzo Piano to design a museum for Houston that was “small on the outside, but big as possible inside,” where the visitor “would never know museum fatigue.” The result is The Menil Collection, a world-renowned building and art collection that is a legacy from Dominique and John de Menil’s lifetime of dedication and patronage to architecture and the arts.
For their distinguished commitment to promoting art, architecture, education, and community, the de Menils will posthumously receive the 2009 Texas Society of Architects Cornerstone Award and will be honored during TSA’s 70th Annual Convention in Houston. TSA President Bill Reeves will present the couple’s son, Francois de Menil, AIA, with a specially engraved commemorative gift during the Presidents’ Gala, Fri., Oct. 22. In addition, the Society will make a donation to a charitable organization in their name.
Established in 1999, the Cornerstone Award is presented in recognition of outstanding contributions that enhance the quality of life by elevating architecture and the arts, promoting the value of community, or preserving the natural environment.
Posted by Texas Society of Architects / AIA at 8:03 PM