Koolhaas and Foster in Dallas for Unveilings

by Stephen Sharpe, Editor of Texas Architect
Once in a generation, if not a lifetime, do architectural events occur such as 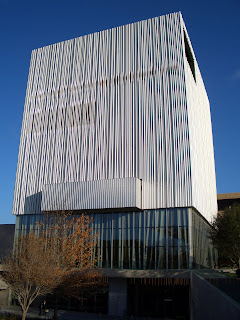 those that took place on Oct. 15-16 at the Dallas Arts District. Two Pritker Prize-winning architects – Rem Koolhaas and Lord Norman Foster – were on hand to help unveil their long-awaited additions to the Arts District. Both made individual presentations to gatherings that filled their respective buildings. A third lecture was presented by Josua Prince-Ramus, who designed the Wyly with Koolhaas before departing Koolhaas’ firm OMA (Office of Metropolitan Architecture) and completed the project through his own firm, REX (Ramus Ella Architects) .
(Photo of the Wyly Theatre at right by Stephen Sharpe.)

Media tours during the morning on Thursday, Oct. 15, allowed architectural journalists to walk through the completed projects with the three architects. Texas Architect was represented by Willis Winters, FAIA, who serves as one of the magazine’s contributing editors. (Also on the tours was Michael Malone, AIA, a member of the TSA Publications Committee who covered the events for TheaterJones.com, an online collaboration of two theater critics based in Dallas. In the photo of Koolhaas on the right, Malone stands in the background.) 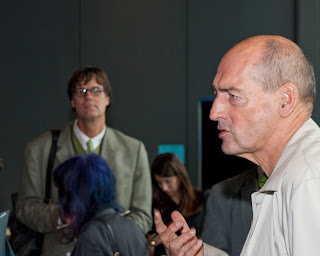 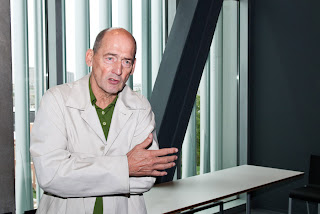 On Thursday afternoon I joined the celebrations, arriving from Austin in time to catch Koolhaas’ lecture in the main performance space of the Dee and Charles Wyly Theatre. Deedie Potter Rose, a member of the search committee that selected Koolhaas for the project, introduced Koolhaas. Rose, well known for her largess within the arts community in Dallas and statewide, and her husband, Rusty Rose, have given $10 million to the Dallas Center for the Performing Arts (now called the AT&T Performing Arts Center), the umbrella organization that funded the construction and operations of the Wyly and Winspear. Their gift led to the naming of the Wyly’s main performance space as the Potter Rose Performance Hall.

Koolhaas, adorned in a bright green long-sleeve knit shirt, filled the 600-seat theater. Having burst on the international stage with 1978 book, “Delirious New York,” Koolhaas pretty much stuck to the same script he has presented to audiences for the past three decades—how he was seduced by the vertical city after he moved to NYC in the early 1970s. While he included a few slides of the Wyly, Koolhaas only spoke about the project as it adhered to his interest in stacking a project’s programmatic elements. I was not the only one who was disappointed that Koolhaas did not engage the audience in a question-and-answer session following his speech. 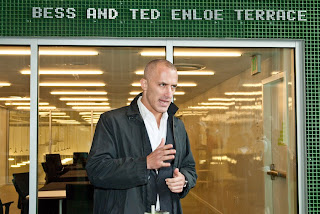 While some pundits report that Koolhaas and Prince-Ramus do not speak to each other, observers said there was no obvious tension between the two designers during the tours earlier that morning.

Prince-Ramus, who served as OMA’s project architect for the Wyly and then continued in that role after leaving Koolhaas’ firm and opening REX in 2006, had his turn on Friday afternoon to speak about the Wyly to a packed house. Prince-Ramus spent more time on the Wyly than Koolhaas, even answering a few questions at the end of his talk. 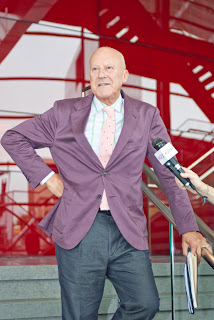 Earlier on Friday, Norman Foster (both a “Sir” and a “Lord”) spoke to a large group in the main performance hall of the Margot and Bill Winspear Opera House. Unfortunately for everyone except those at the very front, the first half of his lecture was almost completely inaudible due to a poorly synched public address system—a distressing malfunction for the opening of such an otherwise exquisitely crafted fine-arts project. Alerted by audience members of the snafu, Foster, resplendent in an orchid-hued sport coat, seemed unfazed despite the echo that reverberated through the room as he clicked through slides illustrating his collaborations with Buckminster Fuller and the early projects of Foster + Partners. The problem was fixed by the time he reached the topic of the Winspear, which he discussed only slightly in the context of his firm’s latest work.

Posted by Texas Society of Architects / AIA at 3:29 PM