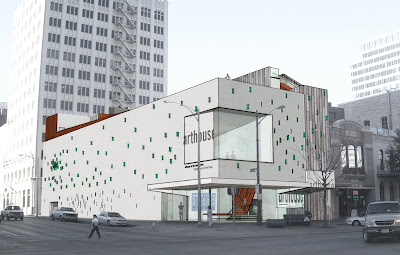 by Noelle Heinze
Texas Architect
“Color-coding history” is how architect Paul Lewis of New York-based architects Lewis.Tsurumaki.Lewis describes the red, green, and yellow trusses of the second-floor gallery’s exposed ceiling in the soon-to-be-completed renovation and expansion of Arthouse at the Jones Center (Austin). Walking through the gallery, Lewis indicates the that the red steel is from the original 1920s Queen Theater, the yellow from a 1950s Lerner Shops department store, and the green from the 2010 renovation, which sought to reinforce the structure. Layers of history define the project, which is a collaboration between the architects and Arthouse’s Building Committee and Staff. In fact, the architects were selected based on an interview, not a proposal, and the design grew organically.
Solar tube lighting, a crow’s-nest view of the Texas Capitol, and 150 green-glass apertures add unique touches to the design. But the new features don’t define the project, the original building does, and the architects and Arthouse let it shine through. Especially on the second floor, which features typical white-walled gallery space—but only on three walls. The fourth is left exposed like the ceilings throughout, showing layers that lead back to the 1920s theater; ornamental plasterwork remains and reminds visitors of the building’s many lives. A 13-ft-high moveable wall dissects the gallery, allowing Arthouse to customize the space to accommodate the art within.
Entering the 20,830-sf building from downtown’s busy Congress Avenue, a monumental stairway framed on the right by an ipe curtain—made up of vertical panels in picket-fence formation—leads directly to the second-floor gallery and widens as one makes the ascent. To the front of the gallery is a 90-seat community/screening room, with a wide panel of glass that wraps around the building’s southeast corner and allows pedestrians to view activity inside. At the rear of the gallery, a stairway leads to a reading-room loft and two artist studios. An exit takes visitors to a 5,500-sf rooftop deck with a large movie screen at one end and a crow’s nest retreat at the other. It’s easy to imagine the parties that will take place here long after an opening’s closing.

The building’s first floor houses staff offices and two galleries, and the lobby desk is a continuation of the ipe stairwell. The entry lounge is wrapped in floor-to-ceiling glass.
The “new” Arthouse at the Jones Center is an exciting space that melds the present with the past. The building opens in October with an inaugural exhibit by Jason Middlebrook, More Art About Buildings and Food. For more information visit www. Arthousetexas.org.
We talked to Paul Lewis of New York-based architects Lewis.Tsurumaki.Lewis about what it was like designing Arthouse in Austin, Texas. 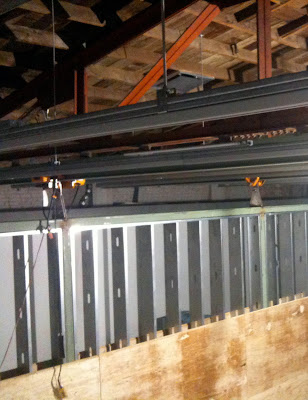 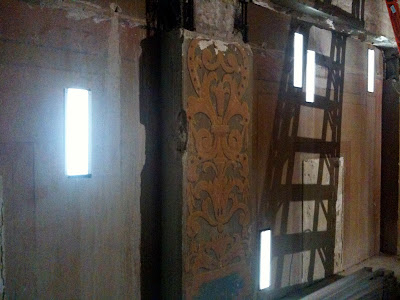 The new glass blocks were positioned to align with the frescos that were left behind from the old Queen Theater. 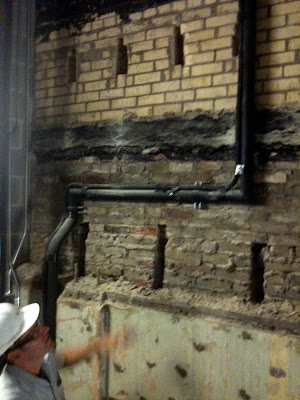 Paul Lewis points out the layers of new and old brick that comprise Arthouse's archeological architecture. 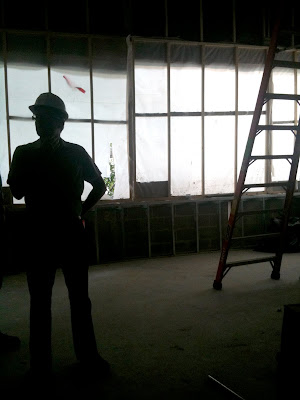 The large second-floor window will be used for video displays viewable from both the street and within the building. 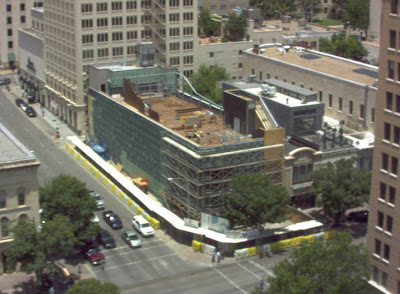