The Tunnel and TSA Beckon You to Houston 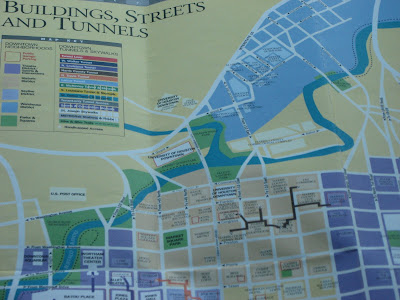 Gayle Pickering
TSA Senior Director
Did you know that underneath Houston’s central business district lies a world unto itself of shops, eateries, and connections to corporate skyscrapers, banks, and retail establishments? Probably not. It’s one of Houston’s best-kept secrets, but in fact, most of downtown’s 150,000-person workforce–and thousands of visitors–go subterranean every day in what Houstonians continue to call simply “the Tunnel.” The Tunnel and the Hyatt’s convenient access is one of the reasons TSA is headquartered at the Hyatt Regency Houston for its 70th Annual Convention, Oct. 22-24. (To reach the George R. Brown Convention Center and TSA activities there, it’s about a 15-minute walk to The Shops at Houston Center where you go above ground, stroll across Discovery Green, and enter the Center at Entrance C.)

Rockefeller Center inspired Houston’s first tunnel, located beneath Fannin Street between Texas and Capitol connecting former Texas Governor Ross Sterling’s 1926 Post-Dispatch Building (now the Magnolia Hotel) with another one of his buildings, the 1931 Sterling Building. It is interesting to note that the architect for each building was Wyatt C. Hedrick, Ross Sterling’s son-in-law.

Over the years, other downtown buildings were connected by tunnels until in 1971 a total of thirteen buildings were accessible underground. Houston’s construction boom of the 1970s and 1980s inspired private developers to expand the Tunnel to most of its present form of about seven miles and 77 buildings. Most of the Tunnel is owned by building owners who lease space in their buildings’ lower levels to retailers. Many owners design their sections of the Tunnel with unique recessed lighting, display windows and art, so you can usually tell when you are leaving one building for another.

Just about every service is available via the Tunnel, and it is monitored by safety personnel and cameras. In addition to food courts, you’ll find dry cleaners, shoe repair shops, quality restaurants, gift shops, boutiques, copy and printing services, post offices, flower shops, doctors, drug stores, salons, and barber shops. The Tunnel is also connected to the Theater District’s performance halls and Bayou Place. The Tunnel is open during business hours Monday through Friday (6 a.m. to 6 p.m.); the city’s portion linking the theater District Parking Garage to Bayou Place and performance halls remains open 24/7. For a current map and more information about the shops and services in the Tunnel and downtown Houston, check out
www.houstondowntown.com and look for the Above & Below Map. Come to Houston in October and experience the Tunnel, a feature that certainly adds Power to the city’s downtown vibe.
Posted by Texas Society of Architects / AIA at 12:42 PM