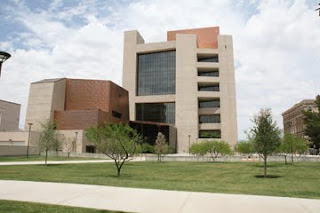 by Stephen Sharpe
In September, when federal officials celebrated the long-anticipated opening of El Paso’s new U.S. courthouse, the design architect was still undecided if he wanted his name on the project. But, even if the architect was still reportedly “going back and forth” about taking credit because of rampant “value engineering,” the building’s dedication plaque includes the name of his firm.

That architect would be Antoine Predock, FAIA, whose idiosyncratic body of work earned him the AIA Gold Medal in 2006. He is best known for buildings that illustrate his ardent interest in nature and the geological conditions of a site. Two examples are the Austin City Hall (2004, in association with Cotera+Reed Architects) and Trinity River Audubon Center (2008 in association with BRW Architects).

As reported in the Nov/Dec 2007 Texas Architect, Predock sent a letter in 2006 to the General Services Administration – the “landlord” of most federal properties, and the client for the courthouse project – requesting that his firm, Antoine Predock Architect, no longer be identified as the project’s design architect. At that time, the project was under construction and several significant changes to Predock’s design were being made due to budget overruns. Those “value engineering” alterations included replacing limestone on the exterior with burnished concrete block and eliminating copper elements. In response to Predock’s request, GSA began referring to ASCG as the “design firm of record.”

Perhaps its no surprise that GSA’s press release announcing the official opening of the courthouse in September did not mention the name of any architectural firm. Instead – again, no surprise – the little architectural information contained in the release focused on elements of the design that gained the building’s LEED Silver certification.

That oversight on credit prompted this reporter to make an inquiry to the GSA’s public affairs office, which responded by stating that BPLW was listed as architect of record. Indeed, Albuquerque-based BPLW Architects & Engineers was the original architect of record, but the firm later merged with ASCG of Anchorage, Alaska. That firm subsequently changed its name to WHPacific and now has its headquarters in Lakewood, Colorado.

Despite the muddled facts in regards to official credit for the courthouse design, the dedication plaque installed inside the courthouse clearly states his firm as a member of the architectural team.

In mid-December, an inquiry to Predock’s office about the credit yielding this response: “Antoine goes back and forth on it.” 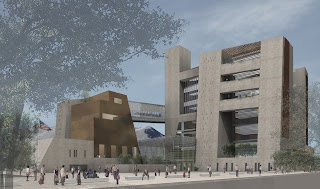 Curiously, the website for Antoine Predock Architect includes the El Paso project in the firm’s online portfolio. The online description of the project makes it appear that the project is his. For example: “The new Federal Courthouse is a civic monument that defines the edge of downtown El Paso, framing the magnificent view toward Mount Franklin, while simultaneously establishing a hierarchy of urban spaces that connect the city fabric to the inner spaces of judicial proceedings.  ” The only images on shown on the website are renderings, and there is a disclaimer that states: “Not constructed as depicted above.”

Posted by Texas Society of Architects / AIA at 12:10 PM