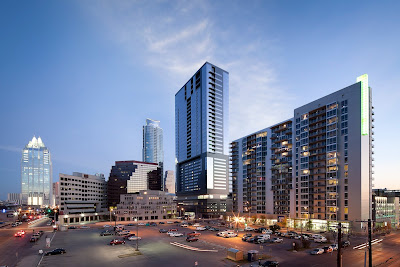 By Noelle Heinze
Standing at the intersection of Willie Nelson Boulevard and Lavaca Street in Austin’s 2nd Street District on a September afternoon, Arthur Andersson of Andersson-Wise Architects points to the towering structure ahead. It’s the nearly complete W Austin Hotel and Residences (W Austin), scheduled to open Dec. 9 and part of the Block 21 development that when finished will include ACL Live and a myriad of retail, restaurant, and office spaces.
As we tour the building, Andersson describes things in sound bites: windows in the hotel rooms become “linear postcards,” a bathroom nestled behind a wall is “a little discovery,” a lobby bar with an illuminated glass backdrop is “like walking into the Milky Way.” He uses adjectives such as “intimate,” “bohemian,” and “spooky,” as we traverse through a series of street-level lounges and bars inside the hotel and adjacent to its lobby. Andersson is engaging and so is his narrative, which is helpful since at the time of the tour very little of the building’s interior is finished out. Andersson-Wise Architects worked in collaboration with Heather Plimmer of Stratus Properties for the interior concept, which the architect describes as “bohemian and loose, differently modern than other W designs.” 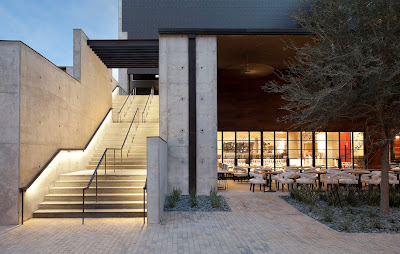 The hardhat tour begins outdoors with an anecdote about the building’s design. “When our firm was selected for this project there was a city council member who had just been elected. She brought in a feng shui expert to make sure we were dealing with the chi of Austin’s City Hall, which is next to the new development,” says Andersson. “According to feng shui principles, a palatial structure will be successful if it is situated facing water and is protected by a mountain. So this palace, City Hall, faces water—Lady Bird Lake, and on the other side is the W Austin—the mountain. So the W Austin was designed to be a suitable backdrop to City Hall and was composed with that in mind. When our firm designs a project, such as Stone Creek Camp in Montana, context is the thing that drives our decision-making, and in just about every case nature drives the design.” (Note: Stone Creek Camp received a 2010 Texas Society of Architects Design Award. The project is a residential compound built on a ridge overlooking Flathead Lake in rural northwestern Montana. It's featured in the Sept/Oct issue of Texas Architect magazine and on the Texas Society of Architects blog.)
As we approach the W Austin, Andersson notes that site is unencumbered by other tall structures, and that the project was conceived to have all the public spaces at the lower levels, such as office space and meeting rooms. "The tower is designed as a cliff dwelling…like Mesa Verde in Colorado," he says. "The hotel rooms are recessed into the body of the building, and the residences have a broader floor plan, which creates an overhang for the hotel and deep shadows that protect the windows in June, July, and August. This is meant to be a building that responds to the sun. On the north side are very few balconies, and the condominiums have views of sky and city.” 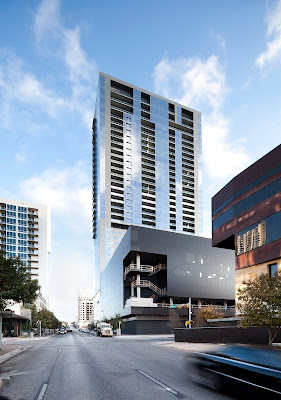 We cross the street as he discusses how they tried to connect the building to the Austin experience. He uses the example of walking or jogging along Lady Bird Lake with dappled light streaming through cyprus tree branches and how that effect will be created as guests and residents enter the building. “As you approach the building, you will move out of the light, into the shade, and into the hotel, where there will be a giant folded screen with lights behind it. So you move into a soft shape, into dappled light that immerses you, and then into the lobby of the building.”
Because large buildings can be daunting, the architects tackled the scale of their project with solid walls that are held down from its structure, “So they almost read as ruins,” says Andersson. “I grew up in California, and I would visit the early Spanish-American missions, and I loved the sense and the feel of these buildings that were sort of half there, because your imagination fills in the other half. This gives you a really intimate sense of scale.”
The lobby of the hotel is designed in forced perspective with the concierge area and the check-in desk toward the back. Wood walls connect ground-floor rooms and guide visitors from the lobby through the “Records Room,” which features walls lined with vinyl records, to the “Secret Bar” with red upholstered walls. "The floor plan is based on a loop; by the time you reach the Secret Bar, there’s no natural light,” says Andersson.
We pass through a room called “The Screen Porch,” which faces the plaza and features a glass wall that slides open, immersing the area in natural light again. The hotel’s signature restaurant is adjacent and is designed as indoor/outdoor space with a series of pivoting steel doors that fold back. It reads as bright and cheery. A whimsical touch is found in concrete form ties plugged with chunks of glass.
After the street-level tour, we head upstairs to view a hotel room, which is organized around an intimate, square floor plan, achieved by the placement of a vertical tower just inside the doorway. An aperture in the tower gives a miniature view into the room. Its design is inspired by the vertical line paintings of artist Barnett Newman. Window height is intentionally low (6’5”) to frame views outside, “linear postcards,” and minimize glass, which plays into the building’s LEED Silver certification. A concrete column plows through the room revealing the building’s structure and adding to the design. The notion of layering different patterns—the pattern of the rug, the floor, and mosaic tile in the bathroom—reinforces the bohemian design.
In contrast to the hotel rooms, the residences feature a wide expanse of floor to ceiling glass, and the ceilings are held back a bit from the walls to give the perception of greater height. In the condominium that we tour, a massive window opens all the way up with only a glass handrail for safety. It’s an unexpected feature that underscores an element of surprise and whimsy that plays throughout the entire project.

At the time of the tour, no photos or video of the W Austin Hotel & Residences were allowed. Check back in January for images and an update on the completed project.

Posted by Texas Society of Architects / AIA at 1:53 PM

Arthur Andersson is such a brilliant architect I don't understand why he isn't know better internationally. This latest project shows us howmature and refined his work has becoem. We need to see a lot more from him.