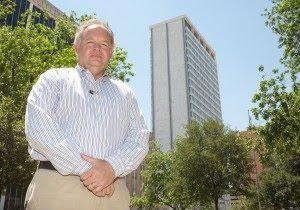 Mark Wellen will lead a tour today that will highlight some of the historic mid-century to modern architecture design of buildings, like the Bank of America building on Wall Street, during Downtown Midland Walking Tour. Cindeka Nealy/Reporter-Telegram
mywesttexas.com
April 29, 2011

Residents will be able to view mid-century to modern architectures on a walking tour this morning around the downtown area.
Midland architect Mark Wellen (Texas Society of Architects member) will lead the free tour, which is open to the public. Those wanting to participate should meet at 10 a.m. in Centennial Plaza.
The tour is being held in conjunction with the Inaugural Texas MODern Month, and Wellen said he hopes to raise awareness of the need to preserve some of Midland's buildings.
"There are great examples of mid-century and modern architecture here," he said looking across Centennial Plaza Friday afternoon.
The tour will be about a mile of walking covering a two-block-by-four-block area and will include about 20 buildings officials have identified as buildings from that period. It's expected to last between one and two hours, Wellen said.
While there are a lot of residential projects in Midland that could be included on the tour, Wellen said officials wanted to keep this first one simple, but they could expand it over time.

Posted by Texas Society of Architects / AIA at 9:44 AM