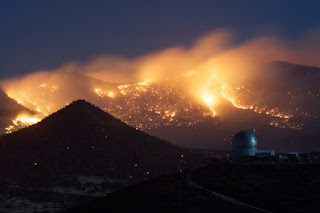 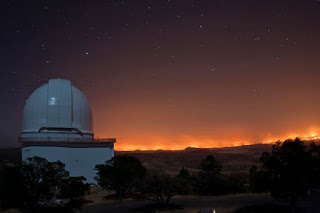 Extremely dry conditions around Texas and the Southwest have fueled numerous wildfires since April, and the weather forecast doesn’t offer much relief to reduce fears of further conflagrations through the summer. While the efforts of firefighters have so far protected populated areas, flames have destroyed a number of homes and other buildings in rural locales.

One of this year’s worst wildfires occurred in April in the Davis Mountains near the McDonald Observatory. Dramatic photos posted on various astronomy websites (www.skyandtelescope.com) showed glowing flames in the vicinity of the telescopes, but that fire was a control burn taken as a precaution to alleviate the threat of a larger disaster. Another blog post (www.space.com) reported that the fire caused a temporary power outage at the observatory complex. And while another wildfire at the same time damaged buildings in the nearby town of Fort Davis, there were no reports of harm to the nineteenth-century military structures at the Fort Davis National Historic Site.

In late June, the Texas Forest Service (txforestservice.tamu.edu) reported that elevated fire weather conditions continued to be in effect northwest of a line from Fort Worth to Del Rio including the southern half of the Texas Panhandle. The report also mentioned that state firefighters had recently responded to two new fires, one in Wichita County and another in Hardeman County. In addition, the report stated that three wildfires – the Miles Fire in Wheeler County (500 acres), the Boyken Fire in Howard County (5,067 acres), and the Mitchell Ranch 2 Fire in Crockett County (3,212 acres) – had been contained.

As of June 27, burn bans were in effect in 230 of the state’s 254 counties, which dampened hopes for fireworks in celebration of the July Fourth holiday.

Posted by Texas Society of Architects / AIA at 4:17 PM