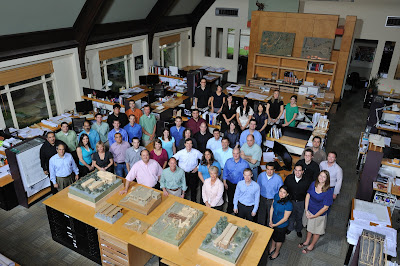 Overland Partners of San Antonio has received the 2010 TSA Architecture Firm Award, which recognizes distinguished architecture and significant contributions to the profession and the community. The firm will be recognized during the TSA Convention in San Antonio in October.
Founded in 1987 by four friends who met at the University of Texas at Austin in the 1970s (Rick Archer, Tim Blonkvist, Robert Schmidt, and Madison Smith), Overland Partners has grown to over 60 professionals working on significant public buildings throughout the United States and several countries. The firm’s collaborative approach to architectural problem solving and design has resulted in a body of work that adheres to a common set of values and design principles rather than a common style.
Among the firm’s projects are the Texas A&M University Bonfire Memorial, College Station; Lady Bird Johnson Wildflower Center, Austin; San Antonio Museum of Art; Riverside Church, Austin; Penn State School of Architecture and Landscape Architecture; and The Bridge Homeless Assistance Center, Dallas.
The firm’s work has been published in more than 20 architectural journals and 80 general interest publications, including the New York Times, Wall Street Journal, Texas Monthly, Time, and Texas Architect. The firm has received numerous awards, such as the AIA National Housing Award (2009), AIA Committee on the Environment Award (2000), AIA/HUD Secretary Award (2009), American Architecture Award, Chicago Athenaeum (numerous years), TSA Design Award (numerous years), and more.
In addition to accolades for architecture, Overland Partners is recognized for being a leader in sustainability and for contributions to its community and to issues around the world, which include humanitarian missions to Cairo; participating in border initiatives to care for the needy in Piedras Negras; and voluntarily designing a sports facility in Benin, Africa. Employees of the firm have served in numerous capacities for TSA and AIA as TSA committee chairs and convention speakers; AIA San Antonio committee chairs, president, and director; and as members of AIA advisory committees. Several of the firm’s members have been inducted into the AIA College of Fellows.
Posted by Texas Society of Architects / AIA at 9:00 AM